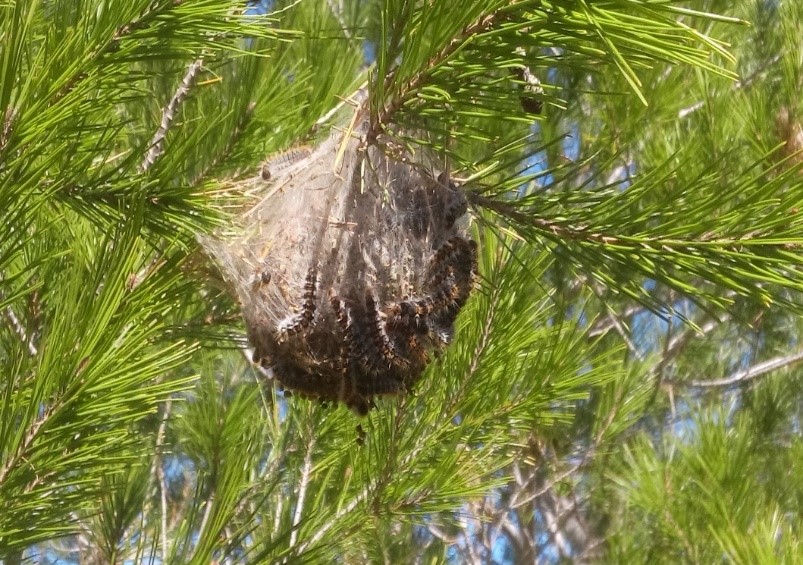 Possible strategies against the processionary

In this document the possible sustainable and respectful strategies for the control of the processionary are detailed, depending on the state of the biological cycle in which the pest is, and at what time of the year we are:

The G trap : it is the one that has historically been used, if you have this trap from other campaigns it is recommended to use this one, since it is a very resistant trap, and only by changing the bag, it is again operational.

In the tests carried out, it has been appreciated that the differences that occur in the number of catches are not statistically significant, which justifies being able to use both models of traps interchangeably.

With these, it is not possible to make a massive capture for use, since the pheromone is not registered as such, so what we usually do are, apart from monitoring, and captures in specific areas (parks, gardens, etc.), barriers that they stop the penetration of the pest in the areas that we want to protect.

It is a strategy that is based on the introduction by means of injections through a specially designed team, of phytosanitary product that once in the vascular system of the tree, is redistributed by all the cells of the plant by translocation of the sap . In this way, regardless of the size of the tree (there is a limitation when the trees are very small, since in order to inject the product a hole must be made in the trunk by means of a drill), it is fully protected, once they have been a month or so after the application, since at the moment it is considered that the product is already distributed in all parts of the sample.

In the case of processionary endotherapy, what happens is that the first-stage larvae feed on the needles, which already accumulate the plant protection product and die (we remember that the larvae in their first stages still do not have stinging hairs) . The importance of making the application in due time is paramount, since the effectiveness of the product is proportional to the state of development of the tracks, the larger they are, the more resistant they are to the product.

Processionary bag in which the application was made late, so it can be seen by the size of the caterpillars, but despite this, a very good efficiency due to the very high mortality of the processionary larvae that is appreciated.

They are rings that are placed around the trunk of the pine in which there are pockets or suspicions that there are processionary caterpillars, which what they do is prevent the caterpillars with stinging hairs, once they have finished their cycle, descend from the pine to be buried by the characteristic processions. It is avoided by putting a belt around the pine with a single opening that leads to a bag that is recommended to be filled with peat or soil, in such a way that they think they have reached the ground, and are buried and pupa to continue their cycle in the that some adults will emerge the following season, and others up to three years later when they go into diapause according to conditions.

There are different sizes of rings depending on the diameter / perimeter of the trunk.

Once the loss of descent of the procession is finished, it is necessary to manipulate the bag where these larvae “have been stored” with gloves, mask and glasses, and eliminate this by burning or burying it. And the following campaign, it is only necessary to replace the bag.

I include a series of photos with the typical sequence:

Find out more or adjust your settings.

This website uses cookies so that we can provide you with the best user experience possible. Cookie information is stored in your browser and performs functions such as recognising you when you return to our website and helping our team to understand which sections of the website you find most interesting and useful.

Strictly Necessary Cookie should be enabled at all times so that we can save your preferences for cookie settings.

If you disable this cookie, we will not be able to save your preferences. This means that every time you visit this website you will need to enable or disable cookies again.

This website uses Google Analytics to collect anonymous information such as the number of visitors to the site, and the most popular pages.

Please enable Strictly Necessary Cookies first so that we can save your preferences!